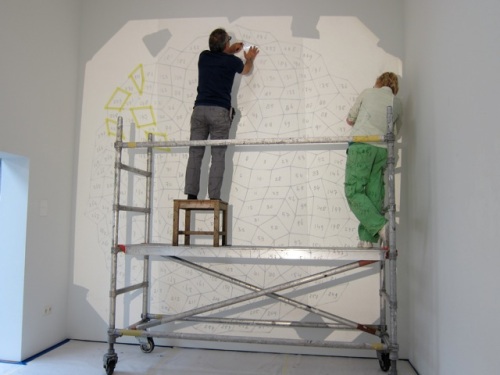 Final stages of the mural (Thomas waiting for paint to dry). 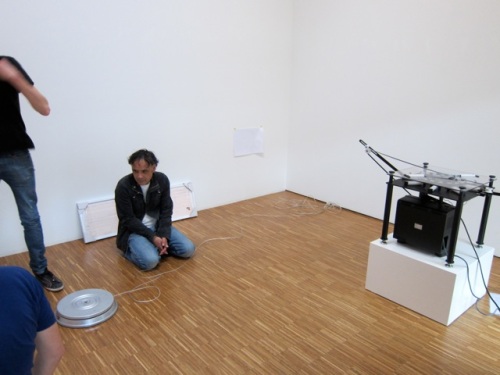 Complicated setting-up of the looping 18mm projection with specially built film carrier for 'long loops'!. Not available in a store near you.

For the second time now De Pont has organized a triennial exhibition titled Brabant Now. Eleven, mainly younger artists who have some connection with Brabant—having been born here, having studied here or residing here—are each given a ‘wool-storage room’ in which to present their work. In 2008 the selection was made by Alex de Vries, former director of the art academy in Den Bosch. This year De Pont has invited Het Wild Gillende Schildersgilde consisting of Aaron van Erp, Wycher Noord and Frank Peeters, to curate the exhibition. These three painters are responsible for the selection of the artists and have moreover provided the exhibition with a theme. All of the participating artists will create new work and use their favorite pop song as the point of departure.

“Aren’t musicians lucky to have such progressive art!” Wassily Kandinsky wrote to the composer Arnold Schönberg back in 1911. By way of color, form and line Kandinsky wanted to move the viewer as directly as music did so with sound. The early abstract paintings of Kandinsky bear little resemblance to the narrative works of Aaron van Erp, Wycher Noord and Frank Peeters. But like Kandinsky a century ago, these artists share a similar fascination with the impact of contemporary music.

Pop concerts draw thousands of people. Television programs on pop music are watched by millions of viewers. In pop songs many discover what moves them and expresses their own emotional concerns. Why does visual art have much more difficulty in appealing to a broad audience on a personal level? Could pop songs offer a way to experience contemporary art? Though these questions basically remain unanswered, they provide a rich basis for an exhibition aimed at giving us a musical perspective on visual art.

The artists whom Aaron van Erp, Wycher Noord and Frank Peeters have invited as fellow participants in this exhibition are largely of their own generation, born around 1975. Many of them have known each other since their art-school days at the Sint Joost in Breda or the art academy in Den Bosch.

Aside from paintings by Van Erp, Noord and Peeters, the exhibition includes work by painters Ibo Pompe and Stijn Peeters, as well as a wall painting by George Korsmit. Added to this is a large sculpture by Maartje Korstanje and an installation created by Peggy Franck and Lobke Burgers. Erik Sep conjures forth a parallel world in architectonic sculptures, made partly with found materials. Stan Wannet makes use of advanced technology in order to set in motion a human figure situated in a room-like environment.

The musical preferences are as diverse as the artists themselves. These often display clear parallels with the work shown. Maartje Korstanje has chosen Tom Waits’s Big Black Mariah, Erik Sep the energetic pounding sounds of Liberty City by Mark Stewart & the Maffia; and Wycher Noord used Johnny Cash’s melancholy Hurt as his point of departure.

What happens when artists take inspiration from their favorite pop song? How do they convey the connotations of the music in a visual image? Ultimately, their concern is the work of art. This will come to have its own power of expression, independent of the music which prompted it. At the same time, the theme does call for music at De Pont. That will be provided with the aid of an audioguide. While looking at each work, visitors can listen to the pop song chosen and experience the chemistry between two forms of art.

This entry was posted in exhibitions, Exhibitions and Activities - Tutors. Bookmark the permalink.